CSL Redlands recently hosted a reunion gathering for Mary Currie. To hear her amazing story of being reunited with her family after years on the streets, read the article in the Redlands Daily Facts: 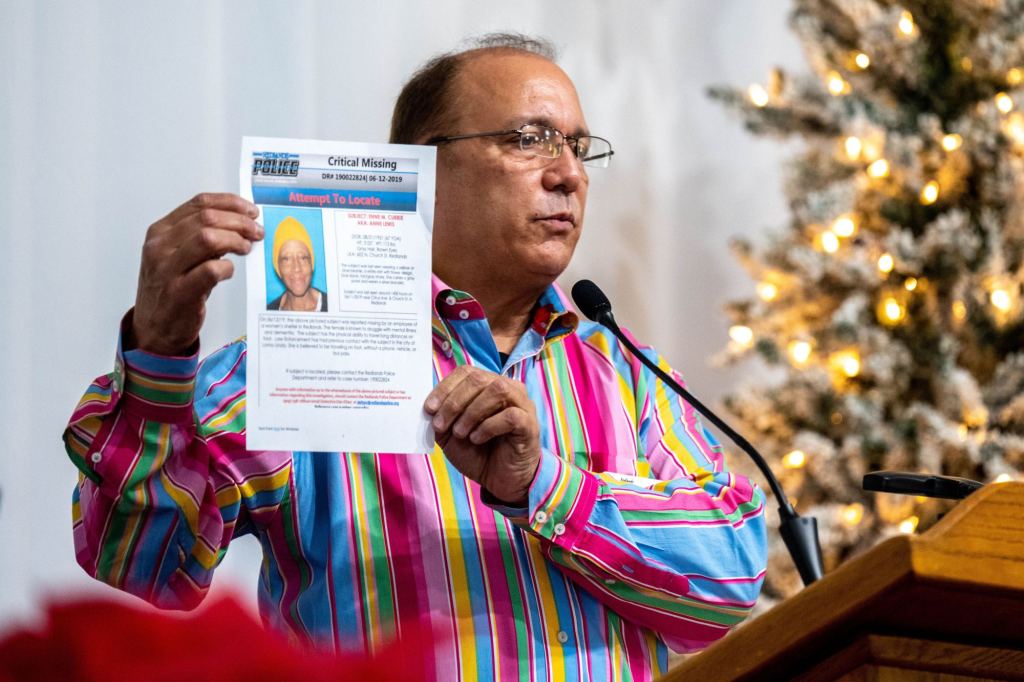 Redlands church helps 70-year-old homeless woman reunite with family
Volunteers at Center for Spiritual Living Redlands had not been able to find Mary Ann Currie’s relatives, until they got a call this fall

Dearest members and friends of the Center for Spiritual Living Redlands,

Many of you have asked about Rev. Dr. Ruth Wilkerson who for more than 40 years was the Minister and Spiritual Leader of our Center in Redlands, CA. Here is an update for you.

Her family has been caring for her at her home in Redlands after extensive hip and thigh surgery at the end of last year. We recently received a note from her son, David Wilkerson, that due to her level of dementia issues, it is necessary for her care to continue in a lovely care facility in Redlands not far from her home. Here is what David wrote about the facility:

“As of this date, Ruth now resides at the Pacific Pines Manor residential care facility, 1438 Pacific Street, South Redlands, 92373, which is a lovely, converted home in the south hillside area not far from her 964 Clifton Avenue house.

“This is a new phase of Ruth’s life, and we trust it will deliver peace, good care, and some additional companionship.  Pacific Pines has only 14 resident patients and can provide for Ruth’s level of dementia issues.  There is a lovely yard in the back with walking paths and shade for visiting with guests.”

Her son, David (drwilkerson1958@gmail.com) is happy to answer your emails regarding Dr. Ruth and should you wish to visit her, due to COVID restrictions, you will need to make an appointment by calling the facility director, Nancy, at 909 798-7077. Of course, Dr. Ruth would probably appreciate cards and notes as well.

Thank you all for your prayers for her continued peace and well being as she navigates this phase of her earthly journey.

Per latest CDC Guidelines: We are asking everyone to please wear a mask to protect and prevent spread of the Delta variant, and in consideration to unvaccinated children in attendance.

Whether you meet in-person at the Center, or watch live via Facebook or YouTube, we will all experience the same service at the same time!

We also invite you to join us on Facebook and YouTube for our Wednesday Evening service. Here is information for those activities.

Email List Sign Up: cslredlands.org/list
This is the best way to keep connected, get our weekly newsletter, and be informed of our services and upcoming events.

Watch for more opportunities to connect with us online. You are loved and treasured. Stay safe. You make a difference.

Big blessings to you,

“We exist in Limitless Opportunities, which are forever seeking expression through us.”
Ernest Holmes, The Science of Mind.  p. 291.1

As June draws to a close, the Spiritually Motivated Social Engagement committee of Centers for Spiritual Living invites our global communities to continue to learn more about Pride Month (see resources below,) support local LGBTQIA2+ groups or create new opportunities for inclusion and advocacy for our LGBTQIA2+ friends in our spiritual communities. (LGBTQIS2+ is lesbian, gay, bisexual, transgender, queer [or sometimes questioning], intersexual, asexual, and two-spirited.)1

It is a profound act of self-love to celebrate the unique ways Spirit manifests in us and others. Pride Month is sometimes seen as the time of year when members of the LGBTQIA2+ communities and their allies don rainbow regalia, participate in parades, and throw parties. More and more people are starting to learn that the celebration that we refer to as Pride, credited as beginning with the Stonewall riots (June 28, 1969) 2, began as early as May 1959 in Los Angeles3 and continued with events leading to Stonewall where Transgender Women of Color led an act of protest.  We stand with the LGBTQIA2+ community as its members profess the truth of their humanity, that their health and wellbeing are essential, that justice and equity are rights, not privileges, and that representation and visibility matter.

Pride Month offers us an opportunity to educate ourselves about eliminating stigma, prejudice, and violence that afflicts a significant part of society.  Centers for Spiritual Living’s declaration of principles state that we believe the ultimate goal of life to be complete freedom from all discord of every nature and that this goal is sure to be attained by all. Discrimination, injustice, and homophobia are just a few of the discords the LGBTQIA2+ community has faced in the past, and in many ways, continues to face today.  Those early Pride events in the United States began to eradicate some of the discord the LGBTQIA2+ community was facing. Now, the world over4, Pride symbolizes not only the celebration of each person’s right to be who they are and love who they love, but it is also a demonstration of radical self-love and love for all.  Pride Month can also be an opportunity to recognize that every day is an occasion to celebrate all people in every facet of life, everywhere on the planet.

May Pride Month, this year, and every year to come, remind us of the innate divinity and spiritual magnificence we all are.

The Human Dignity Trust
The only organization working globally to support strategic litigation to challenge laws that persecute people based on their sexual orientation or gender identity. We provide technical legal, communications, and security assistance to lawyers and activists defending human rights in countries where private, same-sex, consensual sexual activity is criminalized.
https://www.humandignitytrust.org/

Amnesty International
In all too many cases, LGBTI people are harassed in the streets, beaten up, and sometimes killed simply because of who they are. A spate of violence against trans people has claimed the lives of at least 369 individuals between October 2017 and September 2018. Many intersex people worldwide are forced to undergo dangerous, invasive, and completely unnecessary surgeries that can cause life-long physical and psychological side effects.
LGBT rights | Amnesty International

World Wide Pride Calendar
The global landscape for LGBTQ+ rights, protections, and acceptance varies tremendously by location. Some destinations attract millions of visitors to their events, like Madrid Gay Pride, Sao Paulo Gay Pride, or San Francisco Gay Pride. At the same time, more than 70 other countries have laws that allow discrimination or persecution of LGBTQ+ people.
https://www.iglta.org/Events/Gay-Pride-Calendar

Pride Was a Riot – Buzzfeed
Rights for the LGBTQ community in the United States have come a long way — but that isn’t the case everywhere in the world.  Anti-LGBTQ governments still quash people’s rights, and in countries like Iran, Myanmar, and Uganda, being gay is still considered illegal.  We looked at ten years of Pride marches around the world to remind ourselves that, for many people, Pride is still a riot.
Pride Was A Riot — And LGBTQ Demonstrators Around The World Are Still Fighting For Equality (buzzfeednews.com)

How to be an ally
You’ve propped up a rainbow flag and proudly changed your social media handles to reflect your love of all things #Pride2021. But have you gone the extra step to become an advocate, too?
‘Allyship is critical and essential’ to keep moving forward (yahoo.com)

Why Pride Matters
Pride Month and celebrations aren’t just about watching drag queens throw t-shirts from a float or buying items with a rainbow on them. Pride matters for many reasons beyond this, and Pride is much more than a few events in summer.
Why Pride Matters: 10 Ways To Show You Love The LGBTQ Community (2traveldads.com)